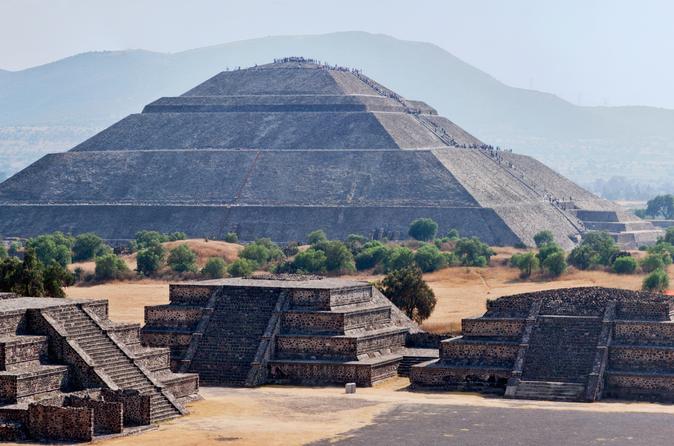 Visit the pyramids of Teotihuacan – City of the Gods – on this archeological tour from Mexico City with a specialized guide. You get to choose between a morning access or an afternoon entrance to witness the sunset on this majestic area.

If you select the Morning Access, when your guide meets you early in the morning, head just 30 miles (48 km) from Mexico City to Teotihuacan, a UNESCO World Heritage Site. Commonly referred to as the City of the Gods, this pre-Columbian Mesoamerican city is known for its well-preserved murals, vast Avenue of the Dead and the impressive pyramids that mark its landscape.

Arrive at the archeological park before the crowds in the early morning just as it begins to open its gates. Take in the serene and mystical atmosphere as your group meanders through large empty plazas in the absence of the crowds and explore the pyramids. Follow your guide to a variety of less-visited monuments in the complex as well as to famous structures like the Palace of Quetzalpapalot and the Temple of Quetzalcoatl – also called the Temple of the Feathered Serpent – the third largest pyramid at Teotihuacan.

View the intricate murals and other architectural details as your knowledgeable guide explains their archeological significance, shares information on the latest discoveries, and tells stories about the culture that inhabited this ancient city.

Climb the steep steps to the top of the Sun Pyramid and the Moon Pyramid – the principal axis of Teotihuacan. From the summit, view the lengthy Avenue of the Dead, the mile-long (2.5 km) road that divided the city and extended from the Moon Plaza in the north to the Great Compound in the south.

After your tour of Teotihuacan, your guide will take your sgroup to an obsidian workshop to meet a local family and try tastings of several liqueurs made from cactus as well as tequila, mezcal and pulque. Here, you can choose from a variety of traditional Mexican dishes for lunch (purchase at own expense) before your guide delivers you back to the central meeting points.

If you select the Afternoon Option, after being picked up at the meeting point in Mexico City, you’ll be taken on a trip towards North-East Mexico City, across the suburbs, as the guide gives your a brief introduction of the history of the city and the different spots you pass by on the way to the site. At the arrival in Teotihuacan, the tour will start with the Pyramid of the Sun, where you’ll be able to climb it, heading next to the Pyramid of the Moon.

The guide will provide you with explanations on the architecture and urban design of the site, which represents the Mesoamerican cosmovision, along with letting you see the way in which this civilization lived and was organized.

We’ll take a look at the last sun rays that touch the pyramids as the site empties. We’ll find an attractive spot around the pyramids so you can enjoy the sunset before heading to the meeting point in Mexico City.

Visit the pyramids of Teotihuacan – City of the Gods – on this archeological tour from Mexico City with a specialized guide. You get to choose between a morning access or an afternoon entrance to witness the sunset on this majestic area.