Mexico City Private City Tour: Teotihuacan and Basilica of Our Lady of Guadalupe 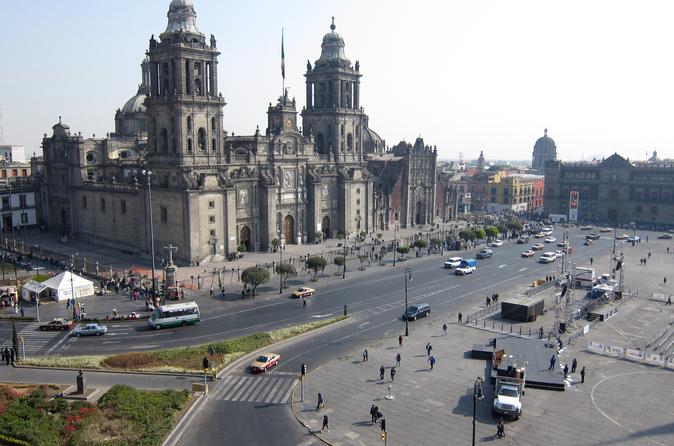 Exclusive Mexico City overview, private tour of Teotihuacán pyramids & Basilica of Our Lady of Guadalupe. One day tour to see all the major attractions of Mexico City, climb one of the tallest pyramids in the world, contemplate the murals of Diego Rivera & visit the very heart of Mexico.

Most probably you have visited a lot of countries, but even if not, you are pretty aware of the fast that it is mostly impossible to truly get to know  the country´s history, culture and tradition without visiting it´s capital. The capital of the country is the center where the most wonderful and important from all over the Mexico is concentrated. We will be happy to introduce you to the heart of Mexico, it´s capital - Mexico City.

Early in the morning you will meet our guide in order to start your enthralling trip together on the main streets and sites of one of the biggest cities in the world. Huge avenues, monuments, palaces and cathedrals it only the small part of everything Mexico City has to offer. You will visit the very heart of Mexico City, it´s central square, called Zocalo in Spanish, which means ¨pedestal¨ in English and was a crucial part of the fundamentals of the urban development during the rule of the Spaniards in the New World. Walking around the Zocalo you will visit the most ancient catholic Cathedral and Presidential Palace, where you will be able to contemplate murals famous Diego Rivera.

Then,  after the overview of the city center you will head the road away from the megalopolis to the ancient Aztec city Teotihuacan, which means ¨City where the men become Gods¨. Teotihuacán is one of the biggest and impressive archaeological complexes in Mexico. This place if still full of  secrets and mysteries which nowadays remain unsolved, but in the same time is one of the most breathtaking and precious cities built by ancient civilizations. Take a walk along the ¨The path of the dead” and climb one of the tallest pyramids on Earth is an essential part of this tour. Standing on the top of the pyramid you won´t be able to look away from the mountain view surrounding the city and can´t help yourself to fell the strongest energy of the place. Being on the top of the pyramid your guide will talk you though the  history of  Teotihuacan and Aztecs, tell you a story about the disappeared tribe, about bloody wars and sacrifices.

Coming back to the city, you will visit the most important religious place not only for catholic people in Mexico, but for the whole Latin America: Basilica of Our Lady of Guadalupe, visited by pilgrims from all over the world and where the original shroud of the Holly Virgin is stored. It is more probable that after such a rich in emotions day, you will want to prolong your visit to Mexico and become more familiar with such and amazing and diverse city, as Mexico City.

Exclusive Mexico City overview, private tour of Teotihuacán pyramids & Basilica of Our Lady of Guadalupe. One day tour to see all the major attractions of Mexico City, climb one of the tallest pyramids in the world, contemplate the murals of Diego Rivera & visit the very heart of Mexico.