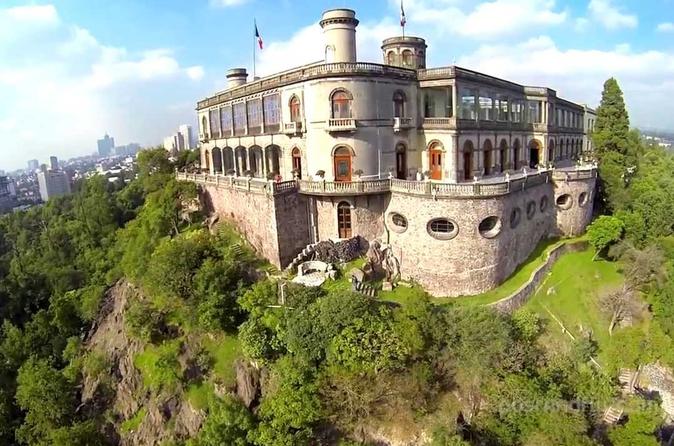 Do not miss the opportunity to visit the Mexican capital, a city full of contrasts - Mexico City.
Chapultepec Castle, the only royal castle of North America will not leave you indifferent.
Anthropology Museum, a treasure of Mexican culture and history.

After having breakfast or arriving at the airport of Mexico City (2 options are possible) we will pick you up to take you to the heart of the Mexican capital - The Zócalo square. There you can see the ruins of the ancient Aztec pyramid and the remanings of the magnificent city of Tenochtitlan, which dazzled the Spanish conquerors. You will admire the beauty of the oldest cathedral in Latin America, and you will find out why Mexicans hang padlocks on the fence inside the cathedral. You will marvel at the famous frescoes of Diego Rivera, who with great love reflects the history of Mexico and its culture. Next, we will walk along the cobbled streets adjoining the main square to reach the beautiful and famous "Reforma" avenue. This avenue is a true jewel of the capital, and is famous for its numerous monuments and statues, among which the Angel of Victory stands out. This avenue will take us to Chapultepec Castle, located on a hill of the same name, which in Nahuatl language means "hill of the grasshoppers." This hill was considered sacred among the Aztecs, but this fact didn´t stop Spaniards from building in it the palace, which is now the only royal castle in all of North America.

From the castle you can appreciate spectacular views of the capital and the magnificent park that surrounds the castle, will not leave you indifferent. The history of the castle is closely related with the history of Mexico, all this and much more will tell your guide on the tour.

The museum presents the luxurious rooms from the

And for the fans of the cinema, in this castle were filmed several scenes of the famous film "Romeo and Juliet", with Leonardo DiCaprio.

You also will visit the Museum of Anthropology, a treasure of Mexican culture and history, where a unique collection of works of art and daily objects of the Olmec, Aztec and Mayan are preserved, as well as the primitive tribes that inhabited it Territory of Mexico and Mesoamerica.

Do not miss the opportunity to visit the Mexican capital, a city full of contrasts - Mexico City.
Chapultepec Castle, the only royal castle of North America will not leave you indifferent.
Anthropology Museum, a treasure of Mexican culture and history.