Private tour to Tula and Queretaro from Mexico City 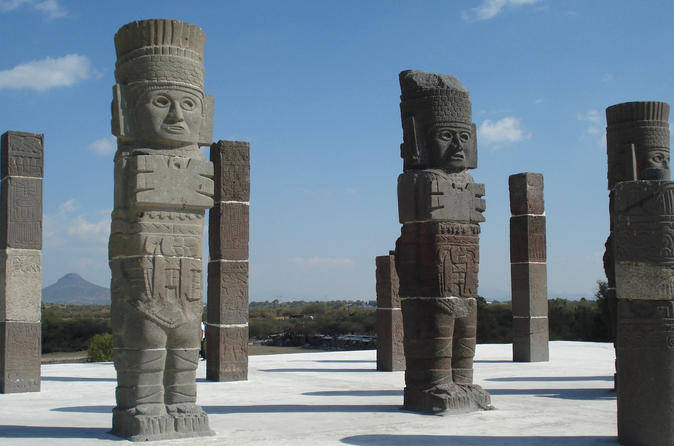 Tula, the legendary Toltec capital, is mentioned in a number of Post-Conquest sources.
Queretaro, a very important colonial city

We will pick you up in the morning to start this interesting tour. We will take you to the ancient capital of the Toltec Empire — TULA  where you will be amazed  by the big stone sculptures of Toltec warriors called “Atlantes” which are at the top of the Temple of Tlahuizcalpantecutli  also known as “Temple of Morning Star”. Know the “Burned Palace “, “ The Ball Game court ”, Freeze with the reliefs of eagles, jaguars and coyotes devouring human hearts. And much more…

The legendary Toltec capital, is mentioned in a number of Post-Conquest sources.

This fantastic site consists of two grand pyramids, two large ball courts, and various buildings and palaces, and was supposedly constructed in honor of the feathered serpent god, Quetzalcóatl. One of the main attractions at the site are the four massive, basalt stone Atlantean statues atop Pyramid B, carved in the form of Toltec warriors

Then we are going to a very important colonial city: Queretaro.

On the way we will visit (El Cerro de las Campanas) The Hill of the Bells. This is one of the most emblematic places of the city, place of execution of the Emperor Maximilian of Habsburgo. The name derives from a legend that tells about some stones that are in the hill and, when beating them they sound like the ringing of the bells.

Queretaro is considered one of the "cradles" of Mexican Independence and much of the credit is given to Josefa Ortiz de Dominguez. She was the wife of the city's mayor, called a corregidor, at the beginning of the 19th century. She used her prominent position to gather intelligence for the nascent insurgency.

The most prominent feature of the city is its enormous aqueduct, consisting of seventy four arches.

In the center of downtown you will find beautiful and interesting colonial buildings, squares, and corners full of history.

Tula, the legendary Toltec capital, is mentioned in a number of Post-Conquest sources.
Queretaro, a very important colonial city